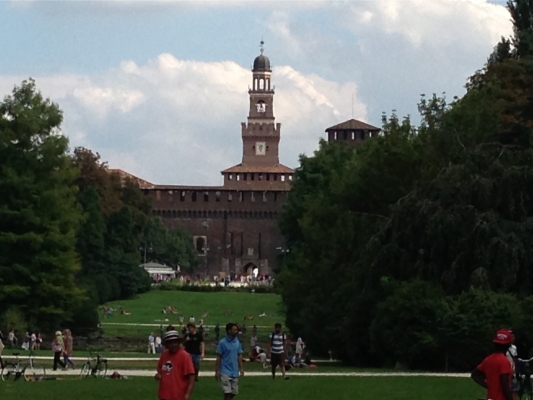 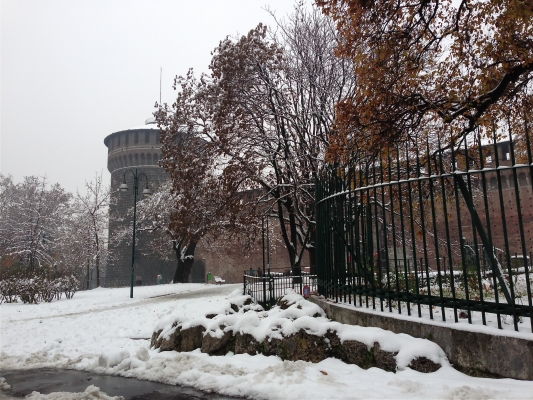 The imposing Sforza Castle (Castello Sforzesco) is one of Milan's main landmarks and symbols. It was built in the  XV century by the Duke of Milan - Francesco Sforza - as his ducal home, even if there has been a building on this site since the mid 1300s.

This fascinating monument is both rich in history and mystery. The castle was built on a square plan with towers at each corner, as well as one in the middle of the facade. This central tower is  known as the Torre del Filarete. Its' 800m perimetre is surrounded by a moat. The main entrance is under the Torre del Filarete in Piazza Cairoli which faces an imposing fountain. Visitors are drawn into the inner courtyard which leads to the so-called Piazza del Cannone and the wonderful Parco Sempione beyond.

Among the many architects who have worked on the Sforza Castle, Filippo Brunelleschi and Leonardo da Vinci are also listed.

The Sforza Castle currently houses the Civiche raccolte d'Arte: the Pinacoteca (Art Gallery) which has works by Canaletto, Mantegna, Bellotto as well as many others; the Museo d'Arte Antica (Museum of Ancient Art) which has brought together twelve centuries of sculpture much of which is from Lombardy, as well as Michelangelo's Pietà Rondinin; the Museo degli Strumenti Musicali (Museum of Musical Instruments), home to instruments made between the XV  and XX century; Museum of Decorative Arts, Prehistoric Museum and the Egyptian Museum where you will be captivated by the Book of the Dead, sarcophagi and mummies.

Many cultural events are held here at the Castle. In particular, we would like to draw your attention to "Sforzinda, Il Castello di Milano per i bambini", an area set aside inside the Castle for children aged 4 to 11 where workshops and activities are held during the week, weekend and holidays as well as museum trips. For further details, please take a look at Sforza Castle website.