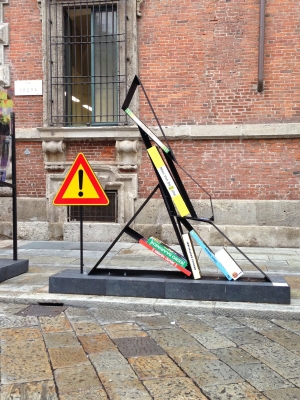 The Pinacoteca di Brera is located in the pedestrian area of the Brera district, which is renowned for its' street cafes and small, chic boutiques.

This world class museum exhibits works of art which can be found in any history of art textbook.

The Pinacoteca is next door to the Accademia di Belle Arti and was founded by Maria Teresa of Austria in 1776. It was originally intended as a collection of exemplary works to help form the students of the Accademia.

Later on, when Milan become the capital of the Italian Kingdom (Regno Italico), the collection was transformed  at the behest of Napoleon into a museum which was to exhibit the most important works of art that had been taken from the territories conquered by the French armed forces.

At the centre of the courtyard visitors can admire the bronze statue of Napoleon I, depicted as Mars, and made by Antonio Canova.

The 38 rooms of the Pinacoteca are home to works of art  by Italian artists from the XIV al XIX century as well as some of the greatest foreign artists. Amongst the most famous are Piero della Francesca, Mantegna, Raffaello, Bramante, Caravaggio, Tintoretto. Thanks to private donors,  the Pinacoteca has been able to expand its' collection over the years to include works from the 1900s by Balla, Carrà, De Pisis, Braque, Modigliani, Morandi, etc.

Walking through the rooms of the Pinacoteca visitors can admire the "Sposalizio della Vergine" by  Raffaello (Raphael), the "Cristo morto" by Mantegna, the Bellini "Pietà", and for the more romantic the renowned "Kiss" by Hayez, the Last Supper by Rubens and the Bull's Head by Picasso...

The museum is laid out well and every room has an explanation of the works of art exhibited. Entrance price is € 10, but children under 18 don't pay.

Families can take advantage of the audio guide for children which only costs € 4. The audio tape records a conversation between two imaginary  guides who have come out of two pictures, one of which is a little devil and the other is a well mannered girl who is keen to learn. During the tour  the girl and the little devil meet characters who have come out of the canvases and who give information about their paintings.

The staff organises tours and workshops for children from September to May. For further details please see the website.